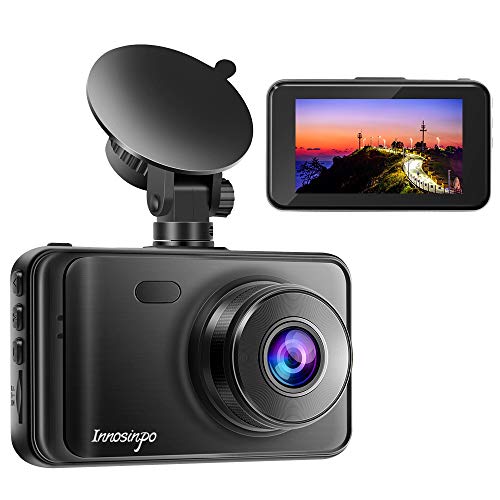 1.There is a film on the screen, it’s not scratched, please tear it off.

2.Please turn off the “Auto Power Off” before use to avoid turn off continuously!

3.If you connect the cam to computer via USB cable, the screen will read Mass storage.

4.The battery of the cam is only for emergence file back up. External power is required for operation.

5.Please prepare a Class 10 micro SD card (NOT INCLUDED) with a capacity of 32GB and format it before first use.

6.We have already updated our user manual based on customer’s feedback. You can download it by contacting our customer services. If you have any questions or needs, please feel free to contact our after-sales team : ymxtek@163.com

If you have any other questions or needs, please feel free to contact us: ymxtek@163.com

We have professional team at your service, and your satisfaction is guaranteed. 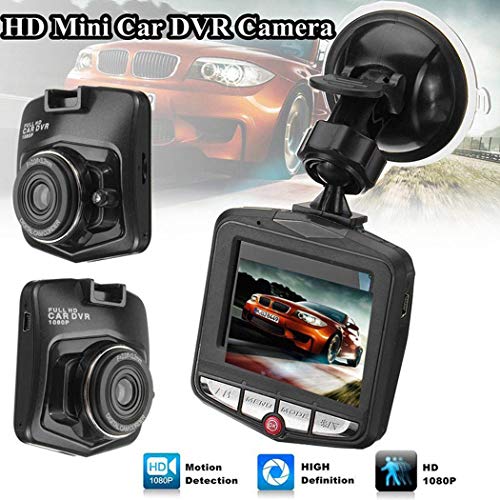 Panasonic, DVD Recorder, DV Input, HDMI, SD Card SlotRecord your home movies and your favorite TV programs easily to DVD disc with the Panasonic DMR-ES25S progressive scan recorder/player, which provides ultimate flexibility in recording media options. It also includes an HDMI digital audio/video output, which can “up-convert” standard DVD movie discs to near HD resolution. Where standard DVD players (even progressive scan models) provide just 480 lines of resolution, the DMR-ES25S up-converts the picture up to 720p and 1080i high-def video formats–taking full advantage of your HD television’s sparkling resolution. (Note that your TV must have an HDMI connection; HDMI cable not included.)

Choose from a full spectrum of recordable DVD media–write-once DVD+R and DVD-R discs or rewritable DVD-RW/+RW and DVD-RAM discs. (For temporary storage, such as your favorite weekly shows, DVD-RAM discs are a great choice as they can be rewritten more times than DVD-RW/+RW discs.) It’s easy to record TV programming with the built-in analog TV tuner with RF pass-through and seven-day TV Guide electronic programming guide. In addition to standard DVD movie and CD audio discs and its compatible recordable formats, the DMR-ES25S can play back CD-R/RW, dual layer DVD-R/+R, and VCD disc formats as well as JPEG, and MP3 digital formats. You can also view individual images and photo slideshows using the integrated Secure Digital (SD) memory card slot (compatible with JPEG and TIFF file formats).

Panasonic’s Time Slip function consists of two features designed to give you added flexibility and control when making DVD recordings: Chasing Playback and Simultaneous Record & Play. With Chasing Playback, you don’t have to wait for an entire program to be recorded before watching it from beginning to end. This feature allows you to watch a program that’s currently being recorded from any point that’s already been recorded–while continuing to record the live program in progress. Simultaneous Record & Play allows you to record a program onto a disc while simultaneously watching any other program that’s previously been recorded on the same disc.

The Direct Navigator feature makes it easy to find a previously recorded program on a disc. A list of recording dates, times, channels and (user-entered) titles are shown on screen. With the Playlist Playback function, you can perform simple non-linear video editing using, such as rearranging the order of scenes, skipping over unwanted scenes, or copying selections

Jump directly to any spot on a disc and begin playback or recording right away with the Rapid Random Access function when using DVD-RAM discs. Even if there is no sequential area of empty space available, this DVD recorder can record data on available space throughout the rest of the disc. You will also avoid searching for a blank spot to start recording, or accidentally recording over desired material.

Enjoy a great picture on you flat screen LCD or plasma HDTV using the component video output, and immersive surround sound via the optical digital audio output for Dolby Digital and DTS home theater effects. It also offers a FireWire port (also known as IEEE1394 or i.Link) for direct connection to a digital video camcorder, enabling you to download footage directly to disc. The full lineup of video and audio connections includes:

Tech Talk
HDMI is a lossless, uncompressed, all-digital audio/video interface to link any audio/video source (such as a set-top box, DVD player, or AV receiver) with your TV–all over a single cable. It provides up to a 5 GB per second bandwidth for transmitting pure digital video and audio signals with no degradation in the transfer. It can carry up to eight discrete audio channels, making it compatible with 7.1-channel surround sound systems. Signals are encrypted with HDCP (High-bandwidth Digital Content Protection) to prevent recording. HDMI is fully backward-compatible with most DVI connections .

High Definition Formats: The most common high-def (HD) video format is 720p, which displays video at 720 vertical by 1280 horizontal pixels. The “p” denotes that it is progressive scan, meaning that all video lines are filled at the same time. The 1080i format displays video at 1080 vertical by 1920 horizontal pixels, and the “i” means that it is interlaced (the old-school way of presenting video where the screen scans the odd-numbered video lines first, then the even-numbered lines). The 1080p format has the same pixel resolution as 1080i, but it is a progressive scan format and thus has a constant vertical resolution of 1080 lines. 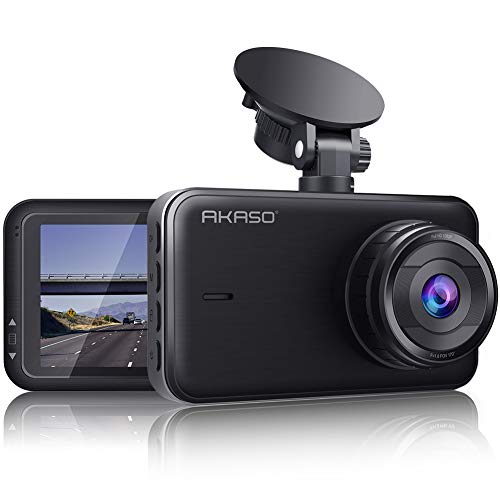 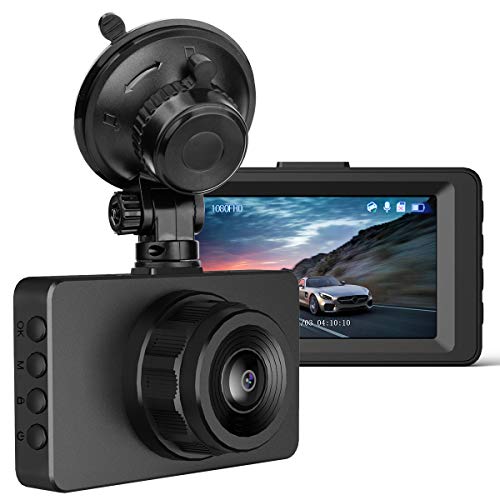 ssontong dash cam can bring you ultra night vision-it has wonderful working performance in dark environments. Drive without fear, as your road trip is under the dash cams cotrol, you just enjoying the comfortable and safer high quality car life.

【Key Functions】:
1.Upgraded Suction Cup: This dash camera come with upgarded suction cup, it is easy to mount on your car windscreen and won’t come off.

2.170° Wide Angle Review — Simultaneously record 4 lanes of traffic, provide a full view of the road. The more you see, the safer you are.

3.G-Sensor — When a serious vehicles collision occurs, the dash cams camera will auto recording and lock current videos. That can be used as evidence of insurance claims to prove an incident was not your fault. The locked video will not be covered.

4.Loop Recording — The car dash camera will 24 Hours Loop Recording creates video clips. Automatically overwrites the oldest file to save the current file. This feature prevents recording from stopping when the SD card is full.

5.Parking Monitoring: Bulit-in G-sensor will keeps working to protect your car when parking!

7.WDR Function — Suitable for situations like low light or backlight, turn it on will improve the color resolution and is able to restore the true colors of objects to the greatest extent.

【Warm Tips】:
1.SD card is not included;
2.Please format SD card on your dash cam before using;
3.The dash cam designed to be plugged into socket to supply power, the built-in battery is only used for parking mode. 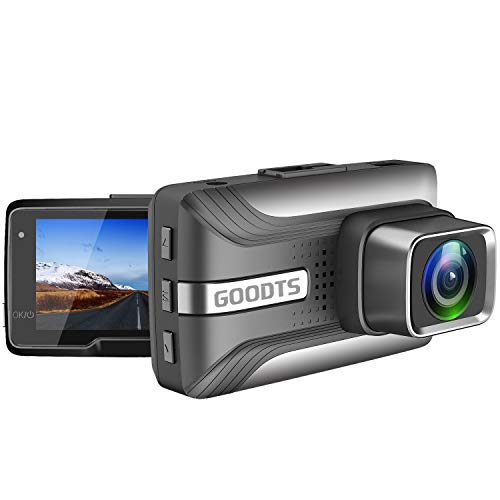 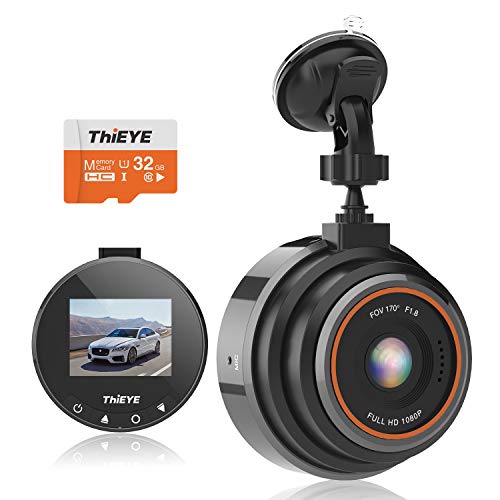 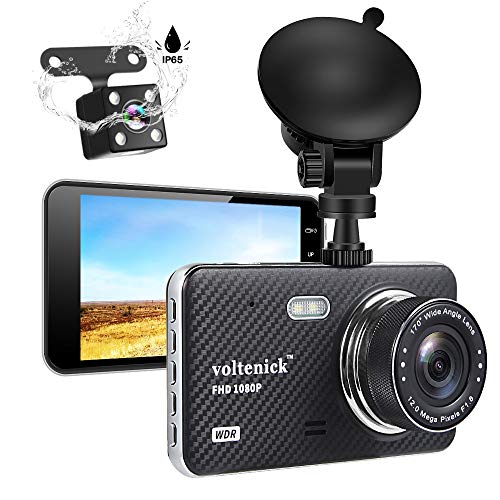 What you should attention:

▪The internal battery is small capacity for backup only. You need plug the car charger while use it;

▪It require a name band Class10 or higher micro SD card,Format your SD card on the camera first before using.

▪Record Do not remove the TF card during the recording process.

▪For cleaning, wipe gently with a soft cloth. Do not use any chemicals for cleaning. ▪In case of overheating, unwanted smoke or unpleasant smell from the device, unplug it immediately from the power outlet to prevent hazardous fire.

How to install the rear camera

Connect the rear camera’s Terminal (2.5 mm diameter) directly to the AV IN port of the camera.

The red cable is the power cord used to illuminate the rear camera LEDs. 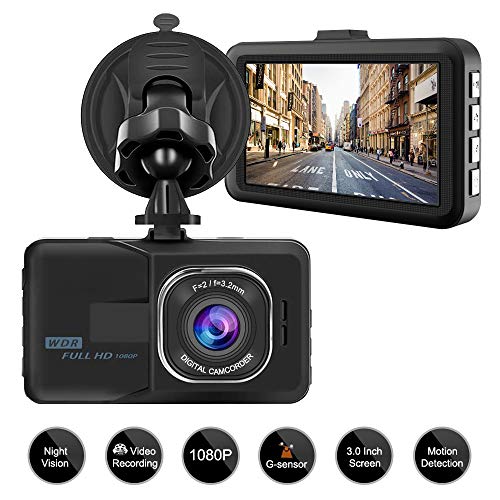 Our Aigoss Dash Camera is a device can record video audio information while driving. With this device you can avoid trouble on road if somebody want to offend you. Also, it can provide clear evidence in car accident. It’s a good companion during your trip!

1.Power interface: 5V 1A
2.LCD screen size: 3.0 LTPS(16:9)
3.Camera: 3 Mega Pixels
4.Files format: AVI
5.Recording video format: M-JPEG
6.Photo format: JPEG
7.Color: Black
8.Material: Plastic, Hardware
9.Language：English / Chinese / Japanese / Korean / Russian / German / Portuguese / Spanish / etc.
10.Frequency：50Hz / 60Hz
11.Power on/off: turn on automatically when fire on and automatically turn off when fire off.
12.Infrared Night Vision: Support
13.Memory Card: TF (max 32G)
14.Charging: red light on when charging and red light off when the charge complete.
There are three methods to charge, the red indicator light up when charging, the entire charging time is about 180 minutes, and the red indicator light automatically off when charging completed.
1.Use power adapter to charge
2.Use PC-USB to charge
3.Use vehicle power to charge
14. Special Function Description
G-sensor
When gravity acceleration up to’?’g, the machine will automatically save the current video of the accident, not delete the file;
SOS
Press the hold button, the current video file is saved as can not be deleted;
Automatically turn on/off
When connected with car charger, device will turn on when car start, turn off and save the last video when car power off.
USB mode
Memory mode: You can replay files, copy or delete files while plugged into your computer.
Camera mode: The machine can be used as a webcam for video chats. Recorder mode: Enters normal video mode. 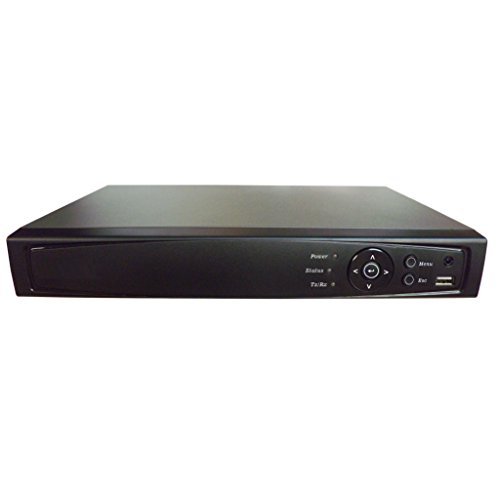 Support One SATA HDD to record for a longer time without any limitation; Each HDD can up to 6TB storage (With Pre-Installed 1TB Hard Drive)

DVR is compatible with all ONVIF version IP cameras, including Hikvision brand.

Up to 8CH synchronous playback at 1080P

What’s in the box? 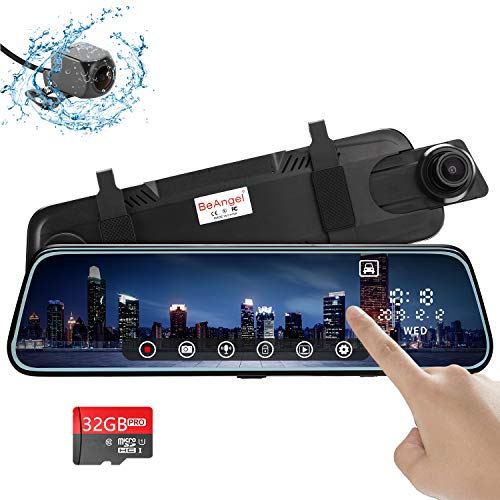 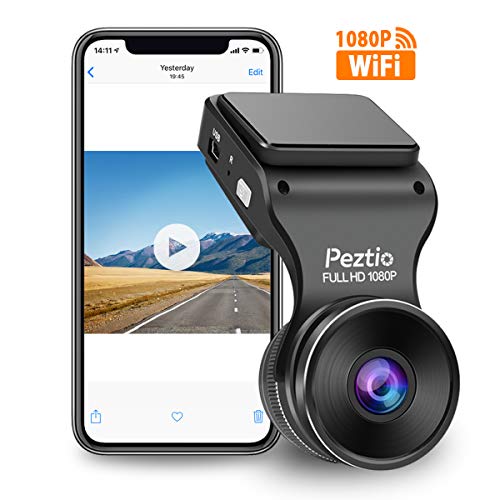 1080P Full HD Resolution– True 1080P resolution, 1.5 times clearer than normal 1080P, recording your driving in details.
Parking Monitor– Master your car 24 hours per day, automatically capture the significant moment even you are not in nearby.
G-Sensor– Built-in three sensitivity G-Sensor automatically save the important evidence when detect a sudden shake/collision.
WDR Technology and Night Vision– Compensates for light/dark spots and balances exposure for superior night video recording at the touch of a button. WDR technology makes the camera’s range can be extended to cover a great span between the bright and dark area in the image makes the low brightness video sharp.
Worry-Free Service– Provide 7*24 technical support, quick reply with 24hours and 1-year warranty, pursue 100% customer satisfaction. 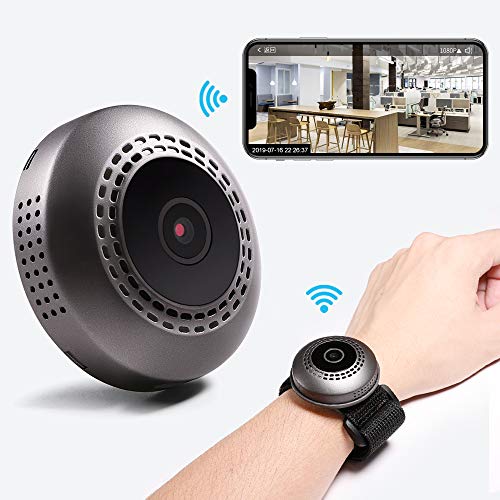 CARIPORT is specializing in home security camera with high quality surveillance by state-of-the-art technology and solution.Each hidden camera has been finely tuned by our Product Development Team before we listing them,we pride ourselves on offering the best security cameras to our customers，we hope CARIPORT’s simple design full-featured mini wireless home camera can help you solve big and small problems in your life.
FEATURES
1.Comes with a mounting clip. Easily attaches as a spycam, nanny cam, bodycam, sports camera, dashcam and surveillance camera.
2. Capture crystal video with HD 1280x720P,encoding H.264, 70 Degree wide angle.
3. Night Vision without sparkling Led lights.
4. Small Size Max Working Time: Built-in 300mAh Li-ion Battery, up to 90mins working time.
5.WITH A WRIST STRAP,convenient to record moments in places you can’t reach.
6. Multipurpose APP: Motion Detection Alarm, AP Connection, IP Connection,Loop Recording, Charging While Recording etc…
Warm Note:
1.Please choose the right network and type in correct password. The camera turns to AP mode if wrong password were typed in, blue indicator flashes slowly in AP mode. Please click Delete on APP and withdraw from APP, check out APP and add a device again.
2.If the TF card is not inserted, the red and blue indicator flicker at the same time when the machine is initialized, and the camera can’t turn on the video. TF card does not support hot swap, if you want to pull off or insert the TF card, Please turn off the camera first.
3.For initial use, the device requires a certain amount of time for IP connection. Please wait patiently. ( About 1-3 minutes based on network conditions). After the IP connection is successful, the red indicator flashes slowly. After multiple refresh, if still showing offline, please try to check the network environment of the device and the mobile phone is good or not.